Article sponsored by Extraco, Misturas, Lógica, Enmacosa and Ingeniería Insitu inside the SITEGI project, cofinanced by the CDTI. (2012)

A low-cost image orthorectification tool based on the utilization of compact cameras and scale bars is developed to obtain the main geometric parameters of masonry bridges for inventory and routine inspection purposes. The technique is validated in three different bridges by comparison with laser scanning data. The surveying process is very delicate and must make a balance between working distance and angle.
Three different cameras are used in the study to establish the relationship between the error and the camera model. Results depict nondependence in error between the length of the bridge element, the type of bridge, and the type of element. Error values for all the cameras are below 4 percent (95 percent of the data). A compact Canon camera, the model with the best technical specifications, shows an error level ranging from 0.5 to 1.5 percent. © 2012 Society of Photo-Optical Instrumentation Engineers (SPIE). DOI:10.1117/1.OE.51.7.073606]

Arch bridges are one of the greatest examples of the use of masonry arches in the worldwide civil engineering heritage. They are present throughout Europe but are especially abundant in the northwestern part of the Iberian Peninsula, because of the irregular orography of the landscape and the great number of rivers.Hundreds of them are still in service with a road or rail network, and in most cases they have been subjected to degradation activities such as in-service loading, extreme weather, poor maintenance, or aggressive human activities. One of the main demands addressed by the scientific community is the development of reliable and affordable methods for documenting these historic structures.
Geometrical parameters are typically documented for inventory purposes and also as a contribution to the structural analysis (finite element methods, limit analysis theory, or equilibrium analysis).A significant number of noncontact measurement techniques can be useful for the documentation of structures. Most of them are based on geodetic approaches: total station, terrestrial laser scanning (static and mobile), and photogrammetry.

Total stations are the most common geodetic instrument in noncontact measurements for civil engineering purposes. They show high precision in range and angular measurement. The creation of a dense mesh is feasible but time-consuming, and this instrumentation is not recommended for threedimensional (3-D) modeling purposes.

Analternative to the total stations for 3-D modeling is to use terrestrial laser scanners. They provide a dense point cloud from the object with a point precision lower than that obtained from the total station.Nevertheless, the precision of the surface model, obtained from the fitting of a set of points, achieves results close to the total station. Initially, the main limitations of these instruments regarding traditional surveying were related to their portability and the cost of equipment (hardware and software). Nowadays, most of the laser scanner manufacturing companies are working to develop more portable and less expensive equipment. One example is the Faro Focus 3-D. Terrestrial laser scanners can work as static or mobile units.Mobile units integrateLiDARand navigation sensors to obtain a georeferenced point cloud.
Photogrammetry appears to be a very competitive geodetic technology for 3-D modeling, especially when a low-cost system is required. In photogrammetric systems, the final precision of point coordinates in object space is highly dependent on a series of parameters such as the type of camera and camera calibration, the restitution algorithms, the illumination quality, and operator skills. Image rectification appears to be one of the simplest photogrammetric methodologies, which gives the possibility of obtaining low-cost geometric measurements from an easy methodology. In this work, the image rectification methodology, using high-end low-cost digital cameras, is compared with one based on static terrestrial laser scanning for the geometric measurements required in the geometric inventory and routine inspection of masonry bridges. For this purpose, three different cameras are tested in three masonry bridges previously modeled using laser scanning. The acquisition work has been performed with the limitations of the technique kept in mind to obtain the best possible results.

Three masonry arch bridges located in the northwest part of the Iberian Peninsula (region of Galicia) were measured for the field work involved in this study. Figure 1(a) depicts the geographical location of the bridges, and Figs. 1(b) to 1(d) shows a generic photograph of each: the Carracedo Bridge, the Lonia Bridge, and the Cernadela Bridge, respectively.

The Cernadela is a medieval five-arch bridge over the Tea River in the council of Mondariz in the province of Pontevedra. According to Albarado et al.,11 the bridge was built in the 15th century and was later restored in several different periods. The two external arches are both round, and the central arches are Gothic, so this configuration of arches provides the bridge with a sloped upper profile.


Central pillars have upstream triangular cutwaters, and only two triangular cutwaters are present in the downstream wall (second and third pillars). Parapets along the whole bridge’s longitudinal profile are made of granite masonry with regular shape, as is the rest of bridge structure. This bridge has a total span length of more than 70 m, with a maximum rise of 6.2 m in its fourth arch, and the arches

The Lonia Bridge is a single-span bridge located in the city of Ourense, one of the most important cities of Galicia. The bridge was built in the 13th century and underwent several restorations. In its last important reconstruction in 1987, the wing walls were rebuilt, and the flagstone path was replaced.
It has a single arch with a 12.8 m span length and a 6.2 m rise. The path draws a pointed profile with a maximum height near 10 m over the water surface, and the average width of the bridge is 3.6 m, in accordance with the common values for medieval bridges. It is composed of regular granitic ashlars in the main structure. The parapets are built with granitic masonry but date from the last restoration.

The Carracedo Bridge is located in the small council village of Láncara in the province of Lugo. This 16th-century arch bridge is over the Neira River and is composed of four round arches with a particular distribution that forces a high sloped profile that sometimes makes it difficult for vehicles to drive over it. Curiously, this bridge presents only one triangular cutwater in its upstream side, while two trapezoidal cutwaters are present in its downstream side. The total length of the bridge does not exceed 45 m, but the maximum height is 8 m, producing a marked sloped path. Arches present span values from 1.7 to 11.6 m, with a maximum rise of 5 m in the biggest arch. Mainly composed of regular granitic ashlars, the parapets present a later masonry, and the path was filled with reinforced concrete and small river boulders in the last restoration.

According to the Guide for the Inspection of Masonry Bridges,12 edited by the Ministry of Transportation of Spain, the geometry of arch bridges must be defined by some parameters that are also related to structural stability.

Unfortunately, these parameters are not included yet in the forms for the inventory and routine inspection of such masonry structures, and standards about the level of admissible geometric error have not been developed until now.

There is a certain discrepancy about the necessity of using high error for such analysis, since normally several safe factors are used during the whole process of structural calculation. Oliveira et al.5 present a morphometric analysis of masonry arches where simplified arch geometry is the basis for the structural evaluation. According to this, Riveiro et al.2 performed an evaluation of the influence of considering the ultimate accurate real geometry of a masonry arch during the monitoring of its structural behavior. In general, several studies have concluded that, for preliminary evaluations, simplified and coarse geometries are completely acceptable. Only when further and deeper inspections are required is advanced instrumentations used to collect the necessary geometric parameters, including destructive essays.
According to that, it is accepted that, under the premises of simplicity and low cost of the method presented in this paper, an error of about a few centimeters in the measurement of large spans does not compromise the validity of the structural evaluation results.


The most important geometric parameters that define the geometry of arch bridges are the rigid backfill, arch ring thickness, span, and rise (Fig. 2). Consequently, they must be gathered during bridge inspection procedures. Table 1 lists the number of parameters measured for each bridge and camera.
Instrumentation: Laser scanner. The Riegl LMS Z 390i static terrestrial laser scanner (Fig. 3) is a rugged and fully portable sensor especially designed for the rapid and accurate acquisition of three-dimensional images. It is specially indicated for architecture, civil engineering, archaeology, and cultural heritage documentation, mining, and city modeling. 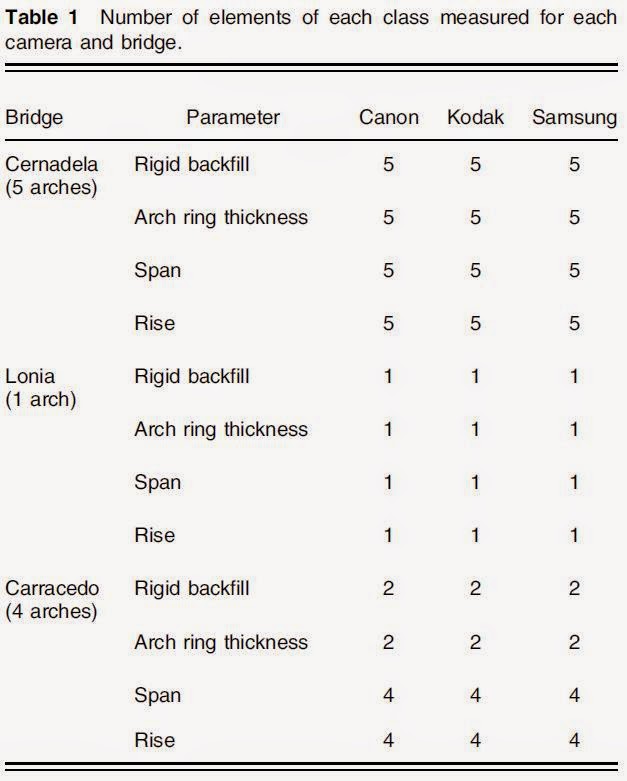 Measurements are performed based on the principle of time of flight (pulsed laser) for range and two encoders for angular estimation. Time of flight scanners use a diode pumped laser, and the distance is based on measurement of time delay while each laser beam is travelling to the object and back to the instrument after hitting the surface of the object.13,14 Pulsed time of flight scanners are more often indicated for large ranges, but they have a higher signalto-noise ratio in small and medium ranges. For small distances, phase shift scanners are better. Precision mechatronic systems are used for positioning the mirrors, which orient the laser beam to the measuring field. A rotating mirror with 90 deg travels is used for vertical measurement, and a 360 deg rotation servo motor allows horizontal scanning to be performed. The point cloud is finally depicted in Cartesian coordinates directly converted from the distance and angular measurements recorded. Technical characteristics of the scanner are shown in Table 2.

The laser scanner is combined with a Nikon D200 digital camera to provide RGB data that finally allows point clouds to be colorized.

Instrumentation: Scale bar. A low-cost scale bar was specifically designed and manufactured for this work (Fig. 5). It consists of four topographic targets fixed to an aluminum structure. Aluminum was selected instead other materials like carbon fiber because it is cheaper and can be easily machined. In addition, the system can be folded and easily transported. The scale bar is calibrated in the laboratory by measuring the distance between the centers of the photogrammetric targets. For this purpose, Aicon 3-D software was used in combination with a single-lens reflex Canon EOS 5D camera with a 20 mm lens. 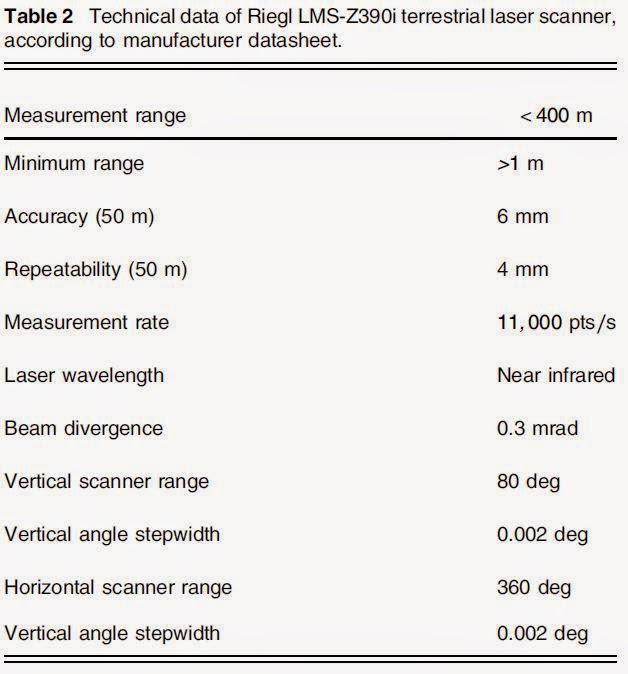 
For more information or if you prefer this article in pdf-format, contact with us: